Vibro-compaction drives a vibrating probe into the ground, which generates lateral vibratory forces to rearrange particles into a dense state. The rearrangement of particles becomes possible only when the induced forces are higher than the inter-particle friction. In saturated cohesionless geomaterial, vibration can generate excess pore water pressure, which reduces inter-particle contact forces (i.e., effective stresses) so that the inter-particle friction (i.e., shear strength) is reduced. As a result, the rearrangement of particles becomes easier. In dry cohesionless geomaterial, water can be injected to make the compaction easier. Water or air is often used to assist the penetration and densification. Backfill is also often used to improve the degree of densification. This technique, called the vibro-flotation method, was first developed in Germany in 1930s and has been successfully used worldwide. The probe for vibro-flotation is commonly referred to as a vibro-flot (Han, 2015).

Deep replacement methods improve the ground to a great depth by partially excavating or displacing problematic geomaterials, which are replaced with better quality and/or densified fill or concrete in a column form. The columns and the surrounding geomaterial form a composite ground or foundation to carry vertical loads and/or shear forces. 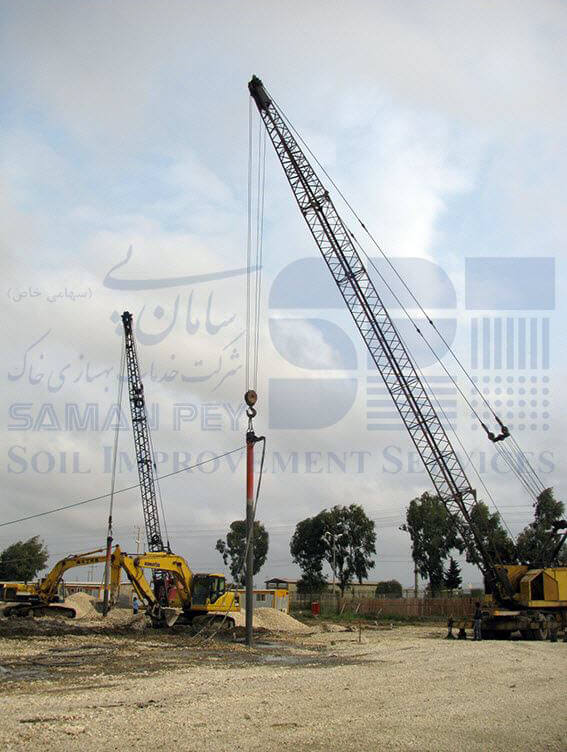 However, the key difference is that vibro compaction relies on the densified in situ soils, while deep replacement (Vibro stone columns) relies on using columns together with the surrounding soil to form a composite foundation (Han, 2015).

Vibro-compaction is suitable for densifying deepdeposits of cohesionless geomaterial with up to 20% fines (preferably less than 10%) but less than 2–3% clay particles.

The 20% limit was developed based on the field evaluation before and after vibro-compaction by Saito (1977). Figure shows the suitable or unsuitable soils for vibro-compaction. The most suitable zone is zone B, which ranges from fine sand to fine gravel. Zone A is suitable for vibro-compaction but may be difficult due to large particles of gravels. Zone C may be feasible but requires longer time for densification due to apparent cohesion for unsaturated soil or relatively low permeability for saturated soil. Fine-grained soil in zone D makes densification impossible; therefore, a deep replacement method, such as stone columns, should be used. The increase of fineness and plasticity of soil reduces the effectiveness of vibro-compaction. This technique works well for saturated loose cohesionless geomaterial. If dry geomaterial is encountered, flushing water may be used or the whole site is even flooded prior to vibro-compaction. Vibro-compaction method has been used to densify loose cohesionless soil up to a depth of 40 m (mostly within 20 m). 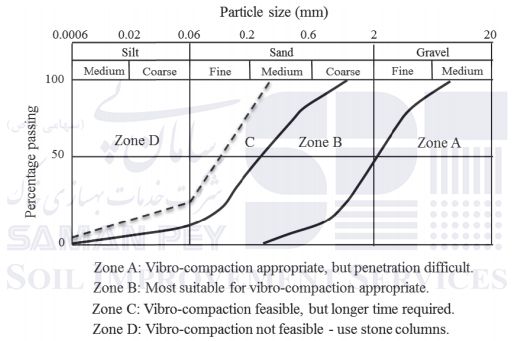 Suitability for vibro-compaction (modified from Woodward, 2005) 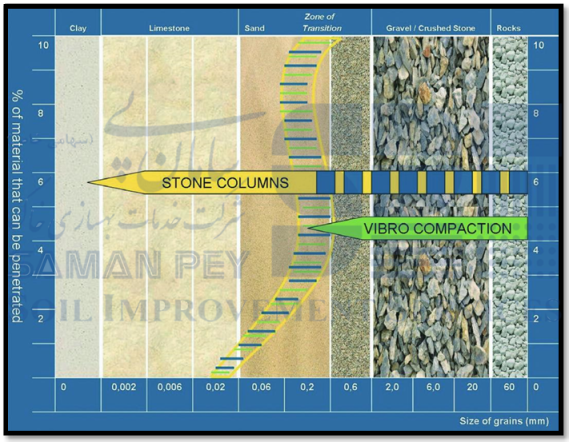 Top and bottom feed methods are more commonly used to install stone columns. The top-feed method requires water for the installation; therefore, it is often referred to as a wet method. The top-feed method for stone column installation is similar to that for vibro-compaction; however, water is mainly used to excavate soil and maintain the stability of the hole in cohesive soil instead of inducing liquefaction of cohesionless soil (Han, 2015).

The bottom-feed method usually uses air instead of water; therefore, it is often referred to as a dry method. Both methods use a vibratory probe. The installation procedure of stone columns using the top-feed wet method is as follows (Han, 2015):

During the installation, spoil is generated. It is important to properly manage the spoil on site by directing the spoil to a slurry pond. 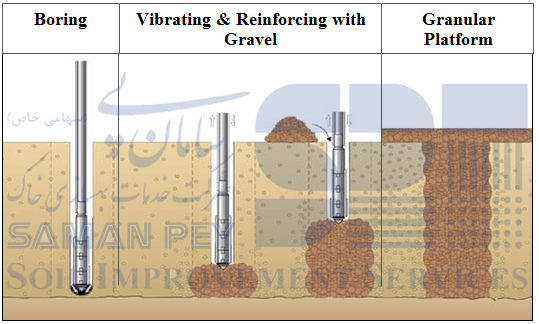 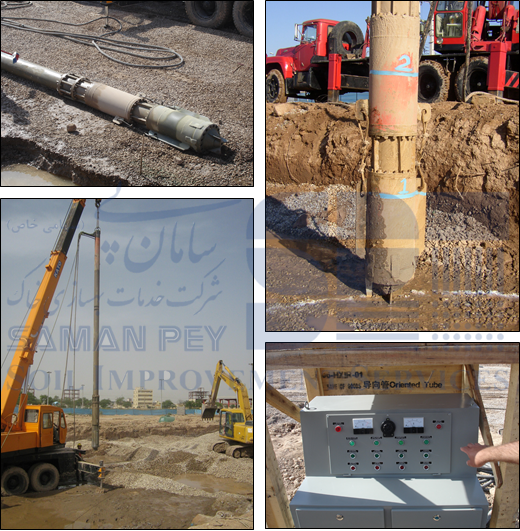 Stone columns have been widely used worldwide for several decades. This technology has a long track record of successful applications. Most design methods for granular columns were developed based on stone columns. Installation of stone columns is fast and easy. They have higher strength and stiffness than sand compaction columns but lower values than concrete columns. Installation of stone columns by bottom feeding does not generate spoil; however, that by top feeding generates spoil, which is not environmentally friendly (Han, 2015).